The rainy days of April are some of my favorite days of the year. It’s perfect weather to curl up with my knitting projects and a good audiobook without feeling like I should be outside doing yard work.

As an avid knitter, twice a year or so, I like to go through my yarn stash. It's good for the yarn and it's good for me to see what I have. I take this opportunity to get rid of skeins of yarn I know I won't use and to make sure the skeins I love are well protected.

Inspect
Let’s face it, wool is moth food. We all like to believe that there’s no way moths can get into our yarn stash, but the truth is, it happens. So when sorting through your yarn, inspect each and every skein for signs of pests. If you find a suspicious skein, don’t put the rest of your stash at risk – get rid of it!

Purge
Every knitter knows that sometimes you wind up with more yarn than you need for a project, or, if you’re like me, you buy yarn thinking you’ll find a use for it someday. This leads to an abundance of unloved yarn taking up your precious space. So when organizing your stash, get real and let go of the yarn you’re not going to use. Ravelry and eBay are good places to sell your unloved skeins and recoup some of the money you spent. Or if you’d rather donate the yarn, town libraries will often take yarn for their knitting groups to use for charity knitting projects.

Protect
Now that you’re sure all of your yarn is pest-free and you’ve pared down your stash, it’s time to protect the skeins you want to keep. I love to use gasket boxes for my yarn. 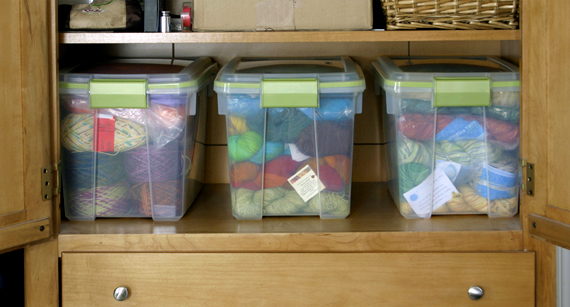 They hold a good number of skeins, plus they keep out dust and moisture. Find a system that works for you – whether you sort by yarn weight, by manufacturer or by color – and keep up with it. And for added protection, try tossing in a lavender or cedar sachet. Moths hate these smells and they won’t harm your yarn.

So now that you’ve seen my stash, I challenge you to get organized and share photos of your yarn stash on Sterilite’s Facebook page!

Need a little boost to organize those crafts and toys? Look no further.

A dear friend of mine sent me this photo asking for a storage solution for her garage, which appears to have been overtaken by toys, activities and everything else imaginable. My first question to her is “what is all this stuff and do you really need it?” I was not surprised to hear her say, “of course I need all of it.” These are games, activities and craft supplies that she needs to keep her children entertained on those rainy April days when they are unable to play outside. 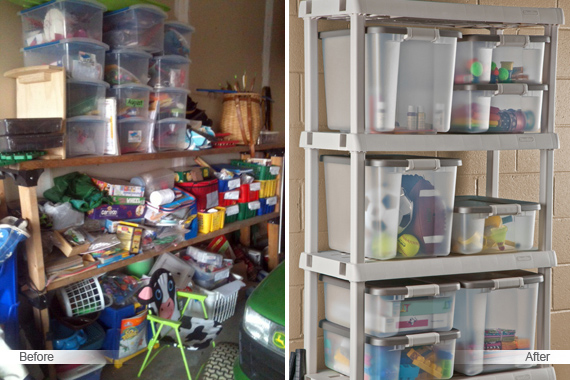 Okay then, first things first. Storing small items out in the open does not work unless you have a system in place. Start by using taller shelving units, and then opt for see-through ShelfTotes, that are designed to fit the shelves properly maximizing space. This system will allow you to store multiple items in one spot thereby avoiding dozens of smaller storage boxes that don’t properly stack atop one another. This is what makes the space appear messy and disorganized.

The next step is to organize each tote by its contents. For example, crafts are all stored together in the craft tote – feel free to label them as such but when using see-through totes, you’ll be able to see the contents easily enough. Try to keep the heavy totes and totes that need to be accessed by the kids regularly on the bottom shelves for safety and convenience.
Lastly, make it a rule of thumb for the whole family that everything has a home within this space. If it doesn’t have a tote to live in, it doesn’t belong in the garage. I think my friend’s husband might like this rule – let’s see if he follows it too! 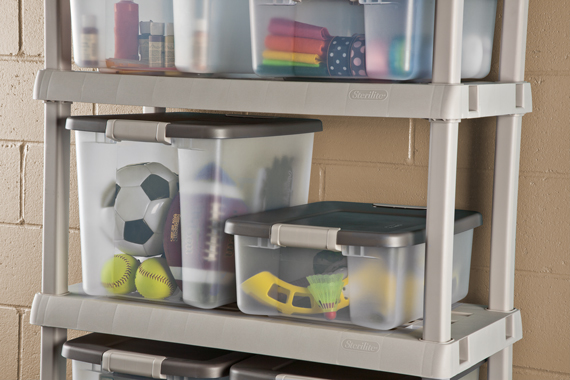 Thinking of organizing your garage too? Go for it! De-clutter, reclaim your garage and think spring!

By Cheryl Mailloux of Sterilite Corporation

Three years ago, I rescued a golden retriever named Molly. Though she is really adorable, she is an aggressive chewer and at 100+ lbs, obviously loves to eat! Most of us know when it is time to stop eating and take home the doggie bag, but not Molly. Having tried to cut back on her food a bit to improve her overall weight, I quickly learned that I could no longer leave the dog food bag on the floor in the pantry as someone would eat until her heart was content. 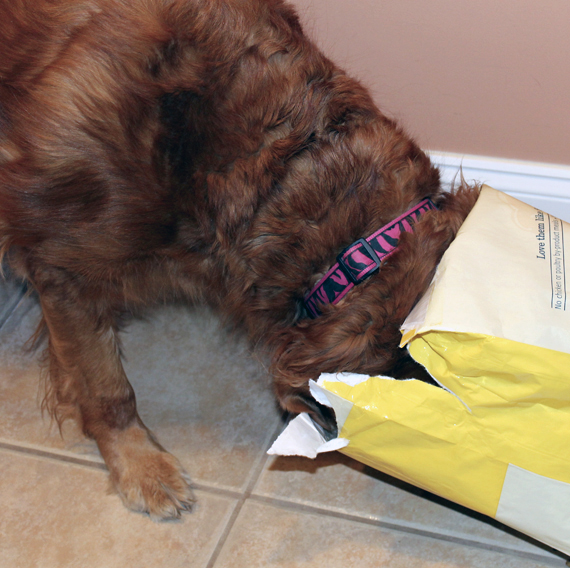 So, I searched and searched for the right container to solve my dilemma with very little luck. I had checked out the local pet stores, but they didn’t offer containers large enough to store a 15 – 20 lb bag of dog food. The ones I did find were not covered and were too bulky for the area I wanted to store the food in. I came across this utility bin that was just the solution to hold a 20 lb bag of food while keeping it fresh. The latches were an added bonus to ensure someone couldn’t stick her paw in the cookie jar. 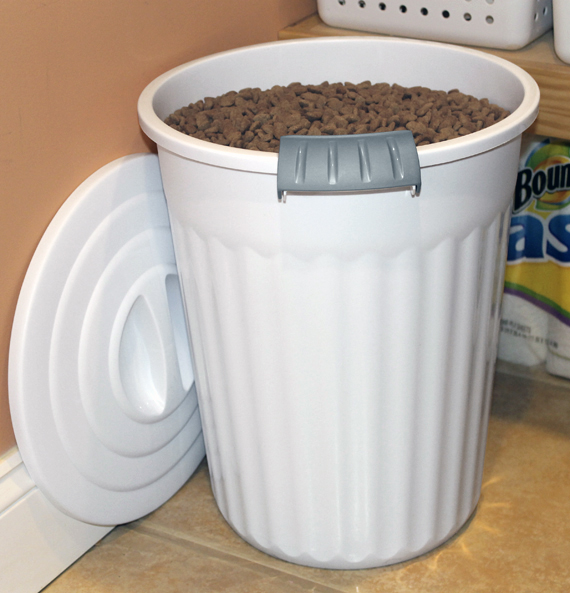 What? You want me to go through my trash? My adventure into the world of recycling…

By Michelle Brooks of Sterilite Corporation

When my city announced that there would be a mandatory recycling program put in place, I thought, "great, one more thing for me to do?" I have a full-time job, I’m raising three active teenagers, and now I have to sort my trash? Ugh! But, I must say I am pleased with how the program has been implemented. The city provided one trash bin and one recycling bin for each household, to be picked up weekly. But one big rule was in place – what you throw out must fit inside of the bins!

I thought, seriously? A family’s weekly garbage would certainly overflow that single trash bin, right? I discovered it wouldn’t, if I recycled! This restriction made me think about what I was throwing away – and made me sort – so I could be sure all my garbage would fit and not be left behind on trash day. Sorting and recycling helps to reduce the overall number of garbage bags going to the landfill … which is, of course, a good thing.

So, what did I do? I needed to set up a system – one that was easy to put into place and easy to follow – after all, it needed to be “teenager-friendly” to be effective. I placed an open wastebasket under my kitchen sink for garbage, neatly kept out of sight.

I have a separate covered wastebasket for recyclables which is in a key location –right next to the fridge. Glass, cans, plastic, and paper – it all goes in there. When either wastebasket fills up, we take them to the outside bins for emptying and start all over again. Simple.

I found that with a plan in place, recycling isn’t as much of a chore as I thought it would be. We sort as we go which limits the mess involved. My kids participate in our efforts and understand the importance, which is perfect, and we know that we are doing our share to help the environment. Now, if I could only train them to look for the recycling symbol, they may not constantly ask ... “Mom, is this recyclable?”