By Jesse Welch of Sterilite Corporation

There once was a person who decided to purchase a home with his wife. After nearly a year of searching, they decided on one with many quaint selling points. One of them was a pool, though the sellers admitted it was not functional at that time.

"Hahaa!" he proclaimed, "I can fix this thing." So began a story spanning three summers. A story of toiling in the sun, replacing all manner of pool parts, from liner to plumbing to filter, paying one massive water bill, staring at test strips, analyzing the results, talking to oneself, realizing there is nobody there, and self-consciously looking around to see if anyone saw the crazy guy. 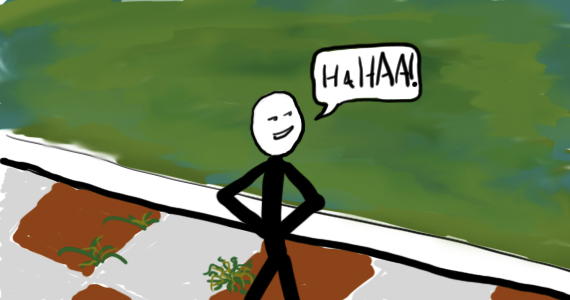 I am that guy, and it is my pool – a pool that has become a spot for enjoyable weekends with friends and family, frequent barbecues, and as of last summer, our annual luau party (no, you can't come, I don't know you).

At the inaugural luau party, my wife and I realized the plethora of challenges that a pool party presents. Admittedly, I'm new to pool ownership, so some of these issues have been smoothed out as I gain experience with it. And seriously, I'm very relieved. At one point I considered just filling the thing with dirt and calling it a day.

At that first party we realized – of the many things needed for pool party success – floats, noodles and pool toys were an essential and obligatory party supply.

Noodles, as most people know, are foam, and can provide plenty of ammunition for pool hijinks. Spraying water at people by blowing into one end, submerging and then letting go to watch the glory of a noodle in flight, and just straight up smacking someone with it. They're fun. You may be wondering how many you need? You need a bunch. They wear out. Stand on them bouncing on the floor of the pool and they flatten. Leave them in the sun too long and they fade to an unappealing that-thing-must-be-really-old color.

Last year, we only had five of them, and you should have seen the look on the kids’ faces when they realized big bro was going to go noodle samurai on them and they didn't have one to defend themselves with. It's enough to make you cry, but no worries, you're in a pool, your face looks wet anyway.

So this year, we decided to get a total of fifteen. While I am confident no child will be left without proper defense for the near-guaranteed sibling assault, owning this many noodles posed a new problem. How do we store these things?

My first thought involved building a contraption from wood and attaching it to the wall, but it seemed like overkill. In the end, I found the perfect solution. I purchased a round laundry hamper and drilled a couple holes in the bottom for water to drain out, and voila! Noodle storage. After any party, or gathering, I just collect the noodles and toss into the laundry hamper. With the holes on the bottom, they get a chance to drain out before I stick them in the garage for long-term storage. 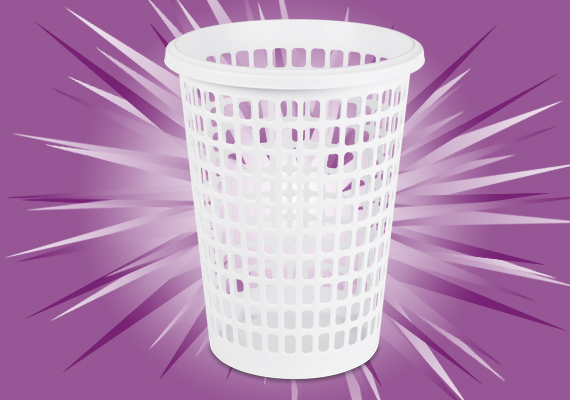 Owning a pool adds a lot of potential fun to your life, but what you inevitably get with that is a tremendous amount of effort, patience and an endless stream of things to spend money on. Using the hamper as my pool noodle storage has helped tame a potential headache before it could rear its noodle covered head, and I couldn't be happier. 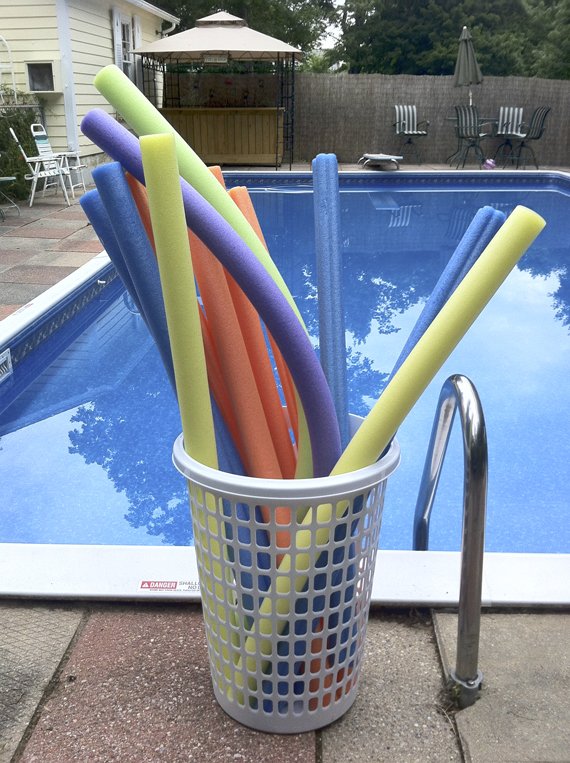 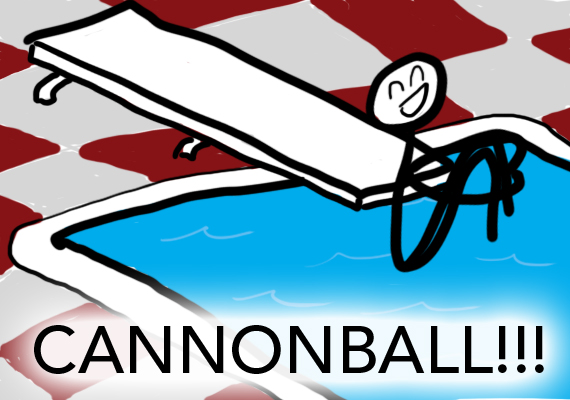 Approximately 5 – 7 million pets enter animal shelters nationwide every year. As a volunteer at a local shelter, Ahisma Haven Animal Rescue, I witness firsthand the need for such animal rescue groups. Many of these organizations are nonprofits and survive on donations and volunteerism alone.

To help keep costs a minimum at Ahisma Haven Animal Rescue, proper storage and organization help play a role in keeping supplies fresh, waste minimal and items like toys, brushes and other daily-use items from being lost or misplaced.

FOOD
Keeping pet food in this Ultra•Seal™ Dry Food Container ensures that it stays fresh and doesn’t go to waste. It’s important to the animals’ health and nutrition that the food be kept fresh. Plus, when most of the food is generously donated or sponsored, it’s even more important to prevent waste. 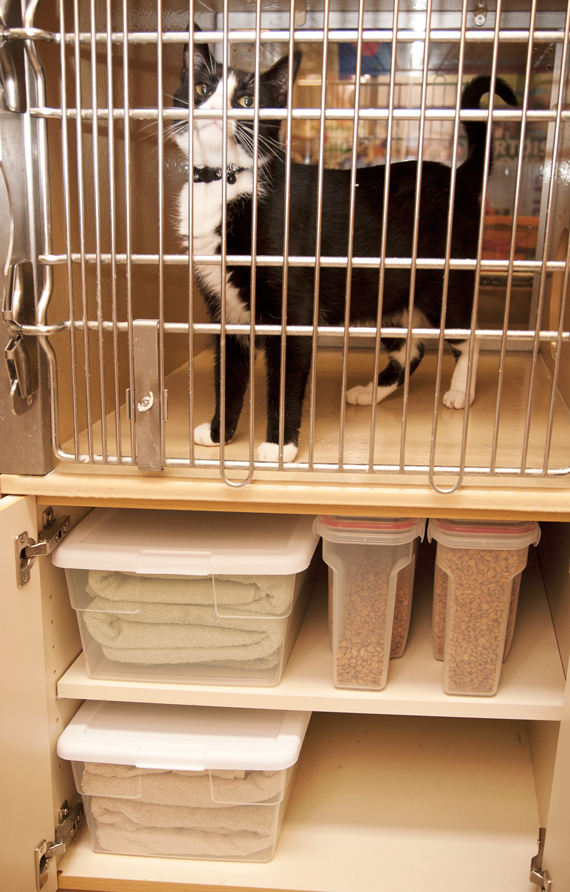 WATER
Keeping the animals hydrated is just as important as keeping them well fed. This 1 Gallon Pitcher makes filling all the water dishes simple and splash free. The secure lid and pop-top help to keep the water free from particles and debris. 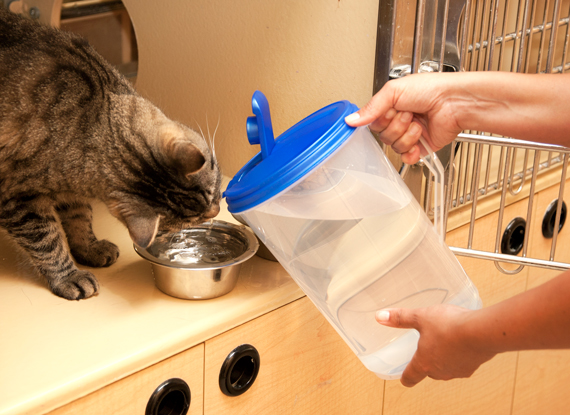 LITTER
Storing fresh cat litter is a cinch with one of these Latching Utility Cans. Cat litter is known to release a dusty debris but the lid and latches help keep the area tidy and dust-free without risk of spillage. 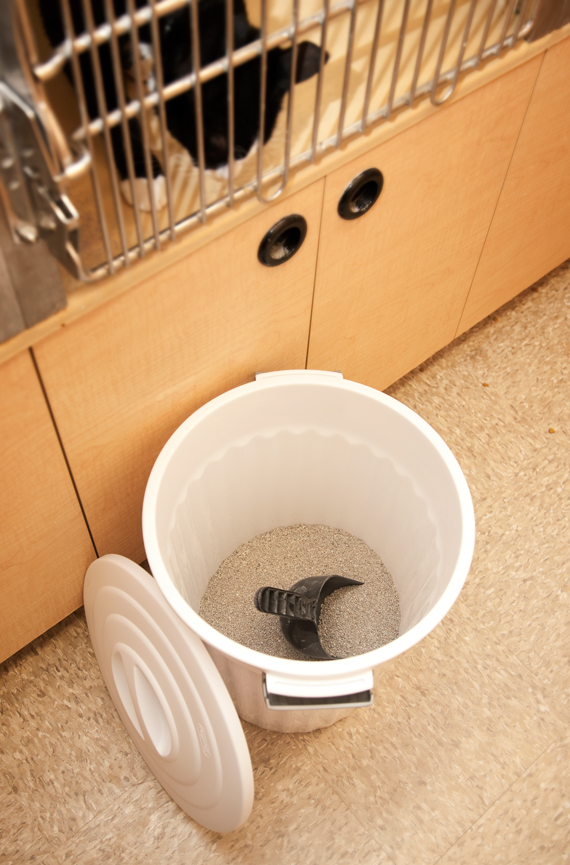 LAUNDRY
Towels, blankets and pet beds are a few items that must be washed every few days to prevent odors and to keep the pets cozy and comfortable. A Wheeled Laundry Hamper is an effective way to keep the laundry concealed, contained and out of the way until laundry day. When the time does come to launder the linens, this hamper simply wheels to the laundry facities making the chore effortless. 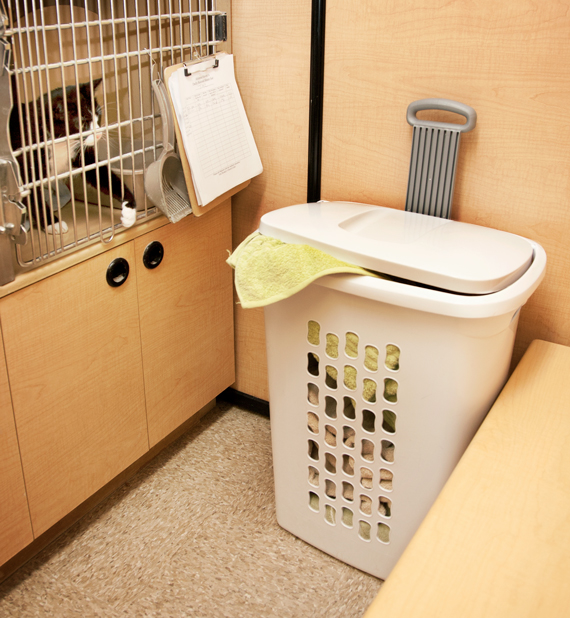 LINEN STORAGE
Once the linens have been washed and folded, storing them in a blanket box will keep them fresh until they are in use again. I find that storing items like towels and blankets properly can extend the life of the linens, ultimately avoiding added cost to the shelter.

ODDS & END STORAGE
While items like brushes, collars, leashes and cat toys are small, they certainly can create disorganization. I find it best to store these odd and ends in baskets on available shelving, creating an organized storage system where items can be easily located.

In their effort to stay organized and to find good homes for abused and unwanted domestic animals, Ahisma Haven is certainly on the right track. If you’re looking for a pet, have a pet you can no longer keep, have questions about low cost spay/neuter, need help with stray or feral cats please email them at info@AhimsaHaven.org

Back-to-College Is Upon Us

It’s that time of year again when college students across the country are getting ready to move back to college. Many will cram their cars full and still end up leaving behind items too big or too numerous to fit.  But I have a few ideas to transport it all — and save the cramming for finals.

Create Space
Stackable File Crates are great for packing, moving and then storing all without the fuss of luggage. With the limited space available in dorm rooms, Underbed Storage Boxes are essential for maximizing storage space while still being able to access the items easily. 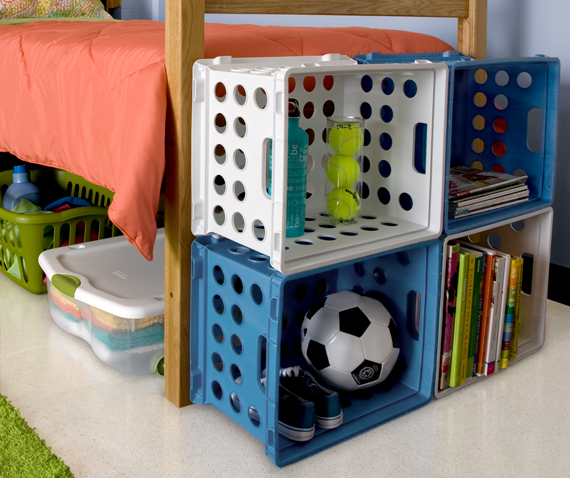 Expand your storage options
Too many clothes for the school issued dresser? Try using drawer carts to make college dorm living simple. Closet and dresser space can be limited so adding these easy-to-move carts can provide you the extra storage you need.  These space savers can hold anything from towels and socks to food and study supplies. The height is also ideal to have this cart double as a bedside table. 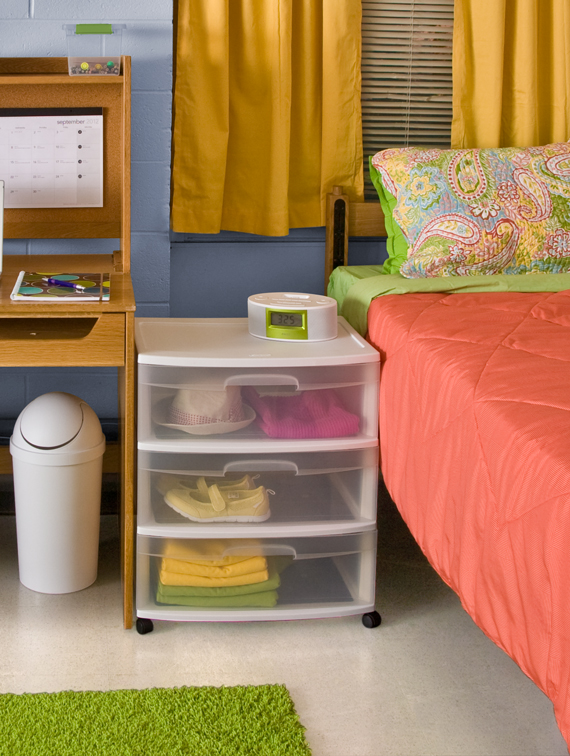 Desktop Organization
I truly believe that a successful education starts with organized study skills. Try equipping your desktop space with countertop drawers, mini crates, clip boxes, and pencil boxes. These items are ideal for keeping all your study tools organized and close at hand.

On-the-go Storage
With moving day just a few months away, be sure to pick up a Portable Footlocker. A Footlocker is another great way to pack, move, and then store all without bringing along your luggage. 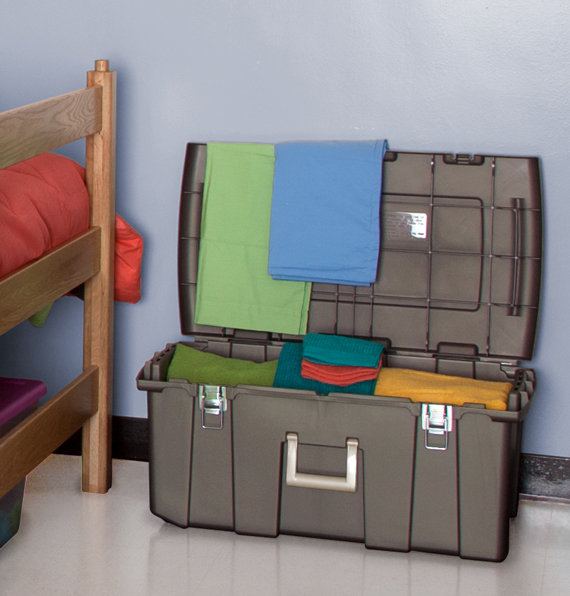 Now that you have all my get-organized-for-Back-to-College tips, go ahead and enjoy the rest of your summer … but be sure to work your butt off this semester – it’s sure to pay off!

Holding On To the Harvest

As the last of this summer’s strawberries were fading from the farmers’ markets, I rushed out to nab a couple of quarts to make one of my favorite summer treats – homemade strawberry ice cream. What better way to savor the tastes of summer a little longer than a cold, refreshing dessert? 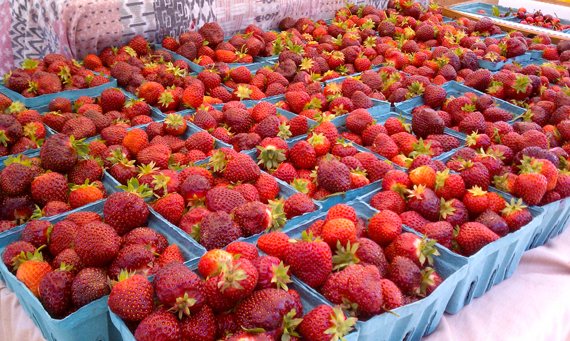 Homemade ice cream is delicious and fairly easy if you have the right equipment. But it’s possible to make it even without an ice cream maker! 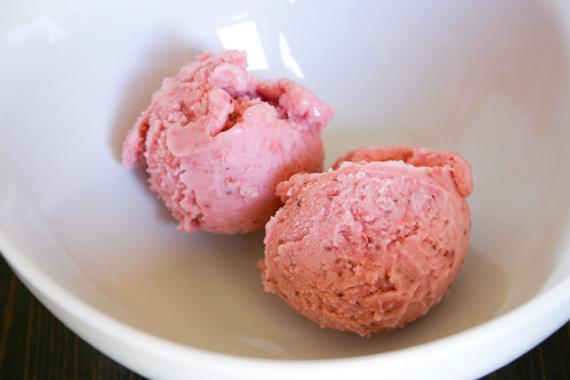 Like many Americans, I am allergic to dairy products, so I made my ice cream with canned coconut milk – the kind you’d find in the ethnic isle of your local grocery store. If you’d prefer to use traditional dairy products, you can refer to the original recipe using the link below.

Heat the coconut milk in a large pan over medium heat. Add the sugar and stir until dissolved. 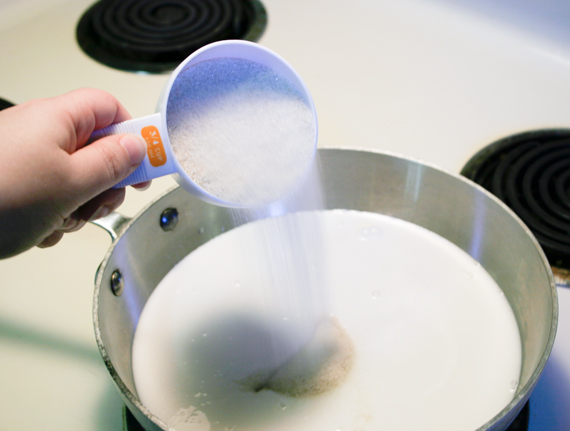 Add the strawberry mixture to the rest of the milk mixture and stir until well combined. Pour into an airtight food storage container and cover with a piece of plastic wrap. Push the plastic wrap down so it’s touching the surface of the ice cream base to prevent a skin from forming. Chill in the refrigerator overnight. 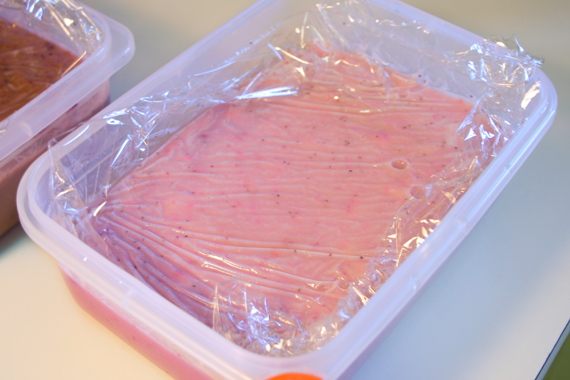 Now that the mixture is well chilled, break out your ice cream maker (did you remember to freeze the canister for at least 24 hours?). Get it all ready to go and turn machine on before adding your ice cream base. Carefully pour the base mixture into the machine and churn for 20 minutes until the ice cream is soft-serve consistency. 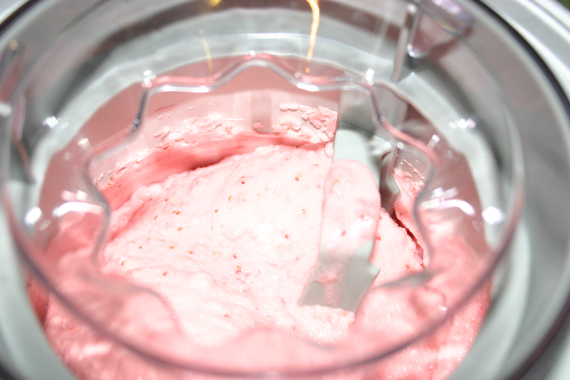 Transfer the ice cream into an airtight food storage container and freeze for several hours before serving. 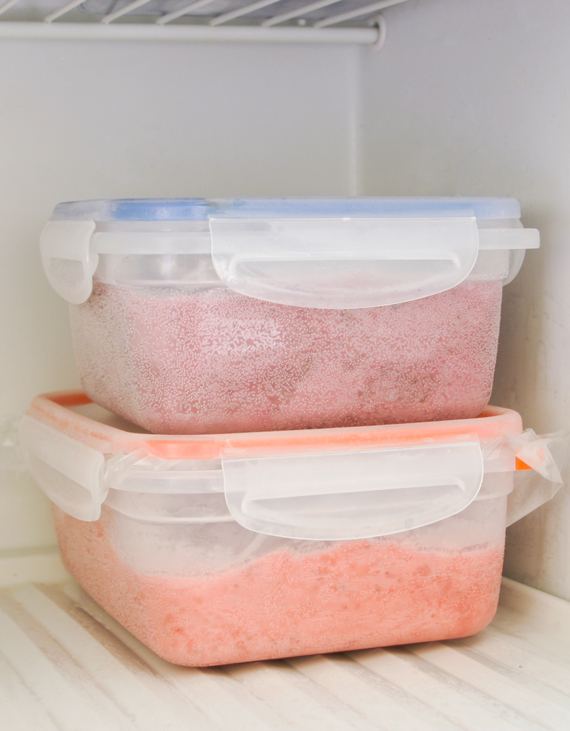 I like to use the Ultra•Seal™ 8.3 cup Rectangle for my homemade ice creams. Most recipes make between one and two quarts so the size is perfect. Plus its rectangular shape means no sticky knuckles! This ice cream is a bit harder than traditional ice creams so let it warm up on the counter for a couple of minutes before trying to scoop. 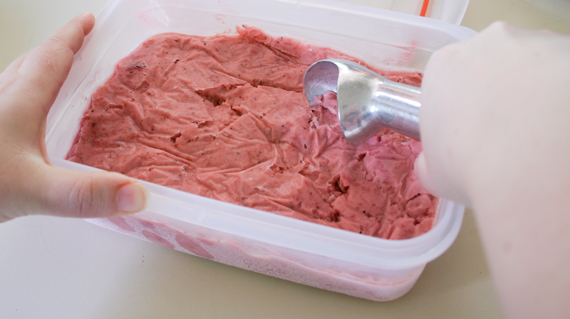 This recipe would be great with other seasonal berries too. I tried making blueberry ice cream and it was pretty good. For those with a bigger sweet tooth, a bit more sugar perhaps, but it was fun to experiment regardless. If you try different berries or other flavorings, I’d love to hear about it! 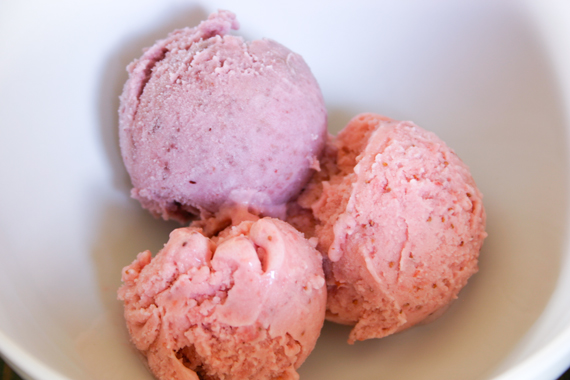 Enjoy your taste of summer!